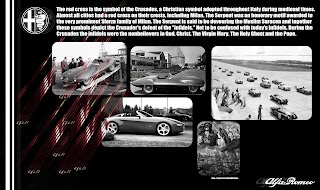 Coming soon an Alfa Romeo Disco Volante / project period :  1.12.2011 - 21.6.2012 /
A bit from history...
The red cross is the symbol of the Crusades, a Christian symbol adopted throughout Italy during medieval times. Almost all cities had a red cross on their crests, including Milan. The Serpent was an honorary motif awarded to the very prominent Sforza family of Milan. The Serpent is said to be devouring the Muslim Saracen and together these symbols depict the Crusader's defeat of the "infidels." Not to be confused with today's infidels. During the Crusades the infidels were the nonbelievers in God, Christ, The Virgin Mary, The Holy Ghost and the Pope.
Crusades on youtube : http://youtu.be/LAgxnA8dymo

my frineds and good stuff